Back to Actions
"actionist art was used in personality development, actionism became multimedial: music, dance singing, therapy, trance exercises. The birthday celebrations of commune members were transformed into fantastic multimedia actionist party events and the study of painting continued as a preparation for actionism."
Otto Muehl, 2004

During the commune years, the actions for photo and film can be divided into various different phases:

In a video material action, there are 3 protagonists: the cameraman and his camera, then the work – man/woman – in the making and finally the artist who manages the creative process.

The cameraman is the third eye, the one who points and reveals the successive creative processes that the two actors, as well as the audience and the video viewers see on the screen.

The artist manages the whole action by supporting, provoking and intervening. In this way, he collaborates decisively in the creative process. He can even become emotionally involved in the course of the action, which requires great rigour on his part.
The artist has various materials at his disposal, such as flour, melted chocolate, pigments, clay, earth, grass, etc., as well as sound or musical elements.

The man or woman is the subject and creator of the action. They are the work in progress. I therefore call them subject-work.
The subject-worker has at his disposal his naked body, his experience, his imagination, his emotions, words and sounds he could produce.

The subject-worker can initially choose one or more themes for the action. Then the artist will ask him to close his eyes in order to lead him into a light trance state, integrating the proposed theme. Without a theme, it is up to the spontaneity and intuition of the artist to lead towards one of the themes.

During the action, the subject-worker opens and closes his eyes according to the artist’s requests. He sees himself on the screen, not only as in a mirror, but also partially, depending on the movements, framing and zooming of the camera. The artist can enter the field of the lens, alone or with the subject-worker.

Then. When he feels and/or understands it, the artist chooses and places organic materials on the body, adding eventually sound elements.

The contribution of organic materials to the action as well as sound elements (sounds/music) has a powerful effect on the subject-worker.
The sensations produced by the materials placed on the body, reinforced by sounds/music, provoke psychic reactions that plunge the subject into his or her total bodily intimacy and thus favour regressions in psychic time as well as emotions. They stimulate the imagination and the creative act.

In addition to the emotional intensity and beauty that such an action can achieve, its therapeutic dimension gives it a particular strength.
The subject-worker has only his body and his psychic material, his memory at his disposal.
It is there that he will draw his inspiration, the material of the action, that he will be able to bring hidden, unknown, blurred, repressed elements out of himself, to express them, to see them on a screen, to shape them according to his imagination, to give them back to his conscience.

The video film is the process of the work of art rendered in its entirety."
Cedric Hay, 2020 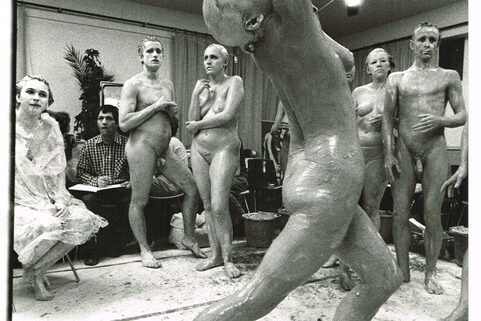 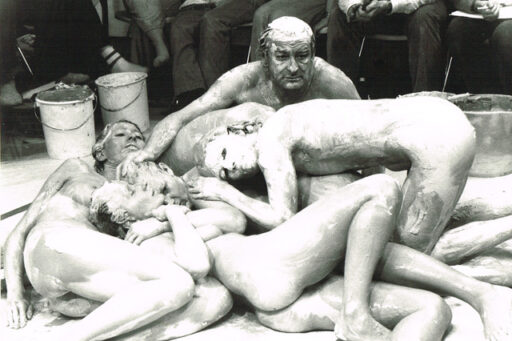