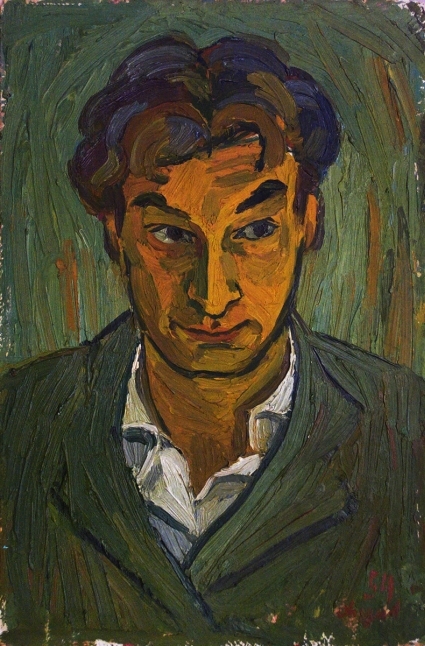 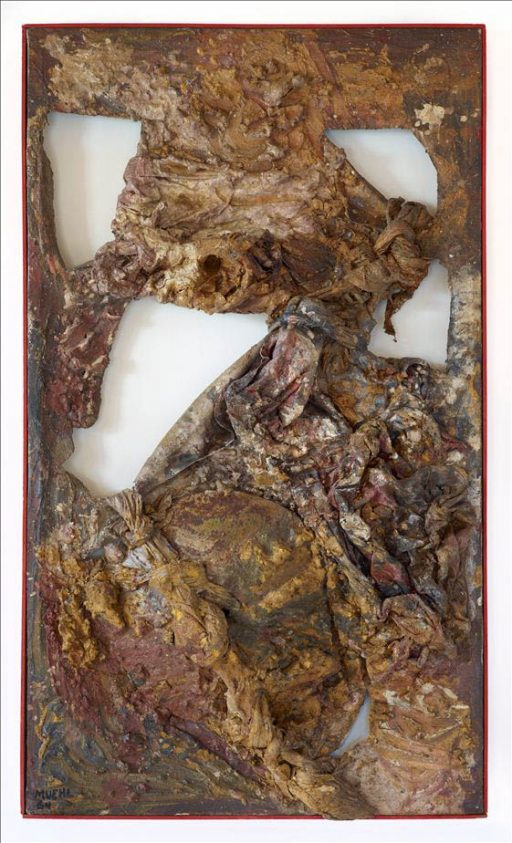 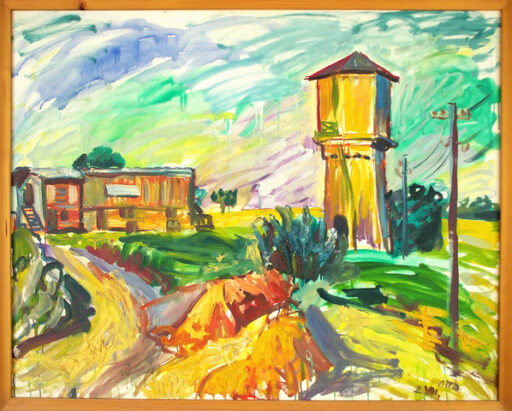 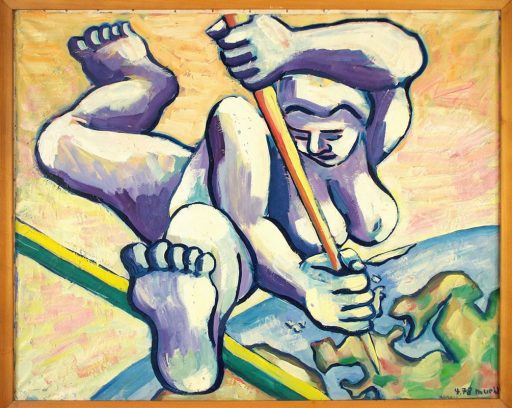 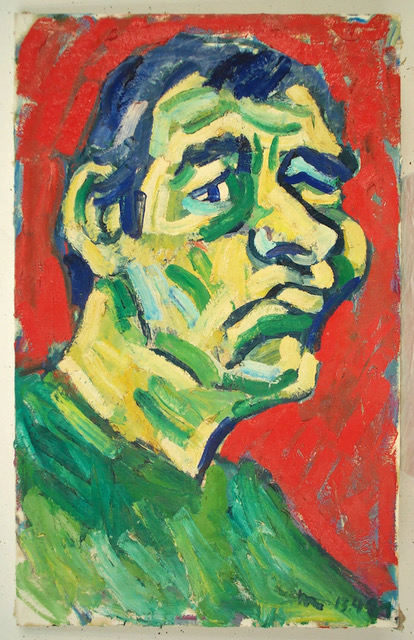 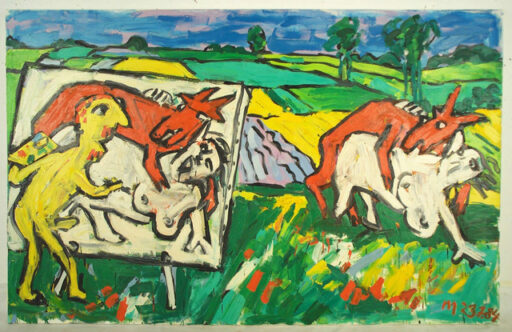 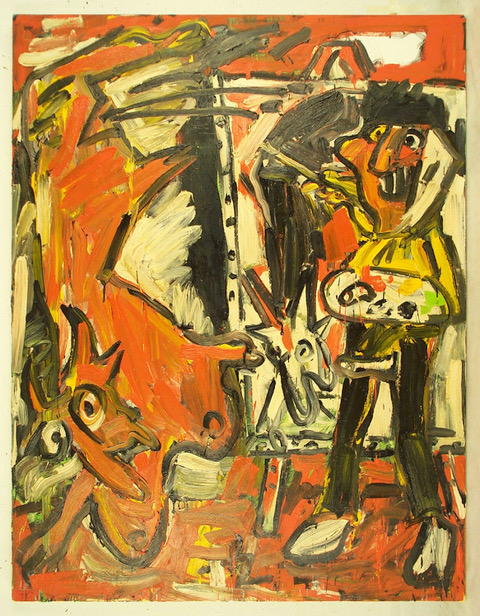 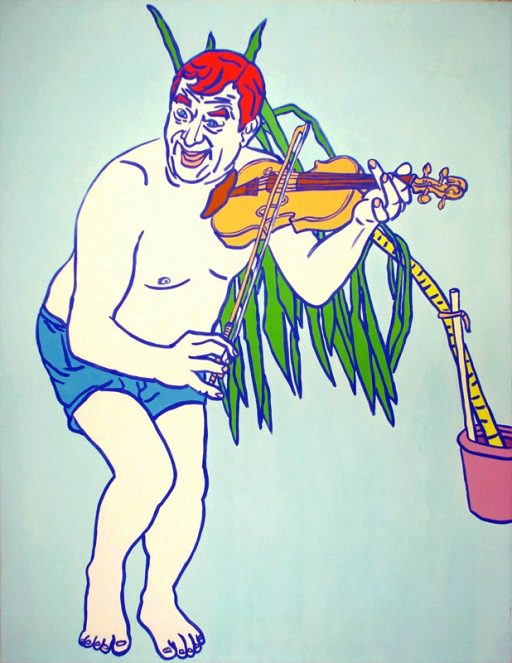 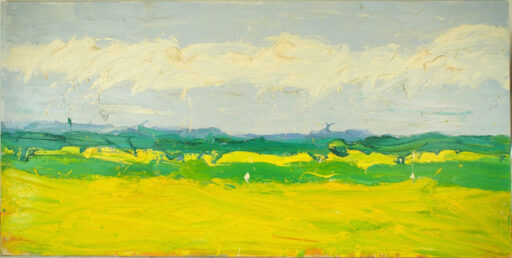 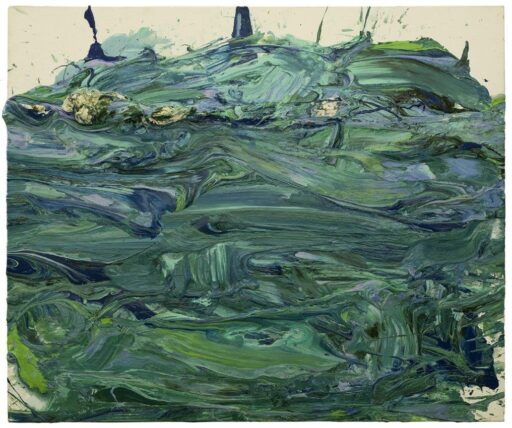 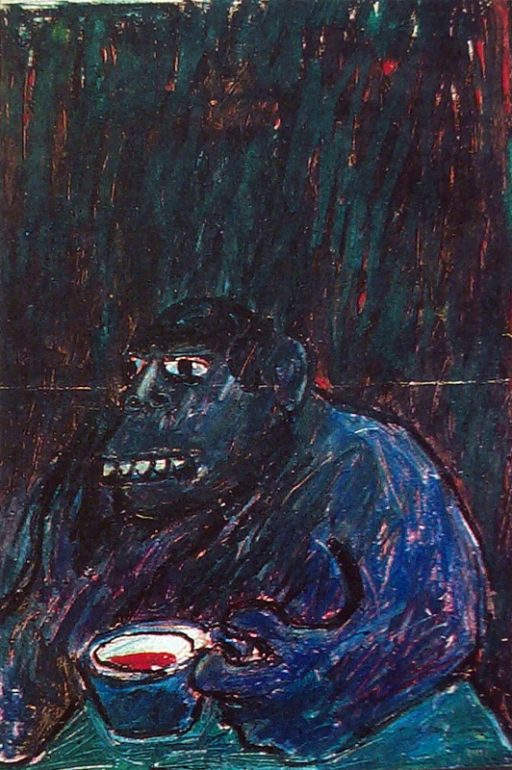 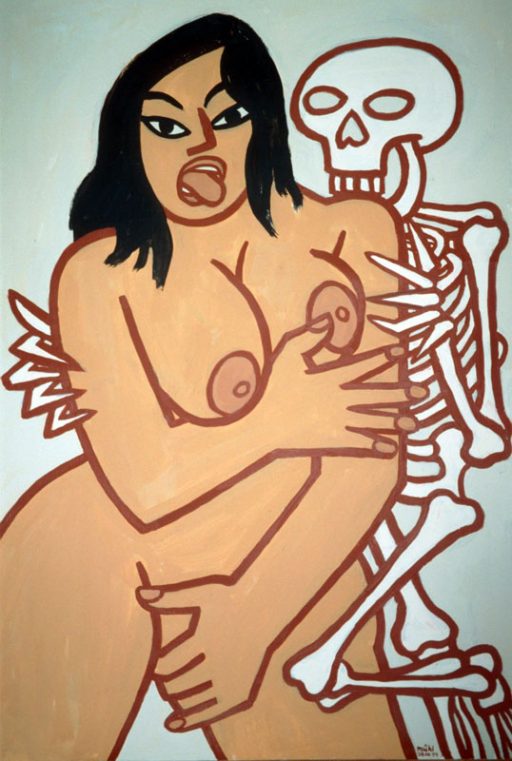 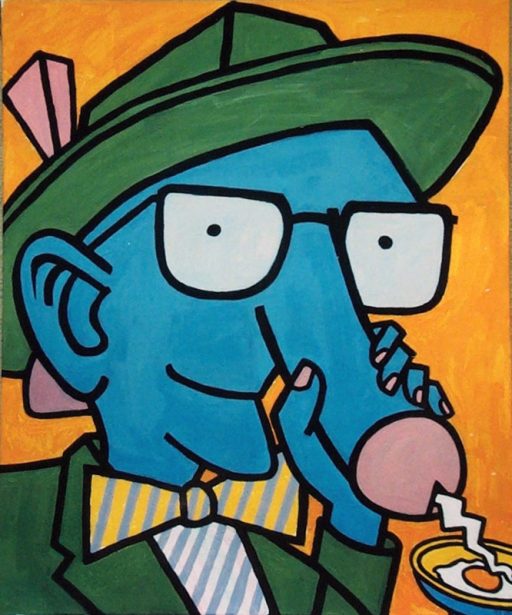 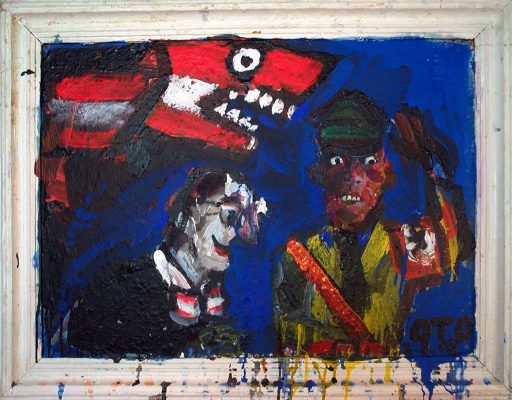 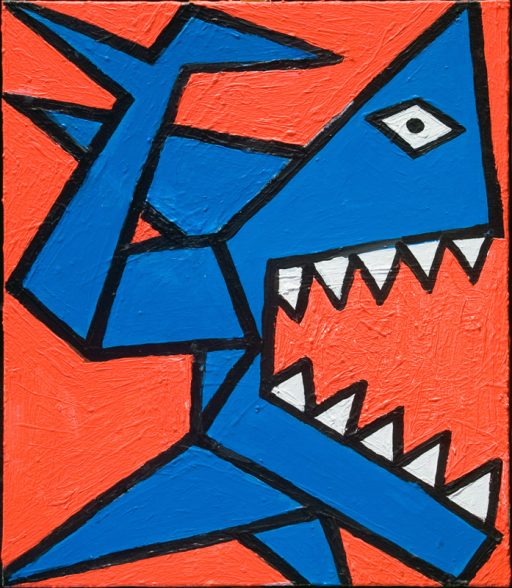 Excess art object, untitled, 2006, 70 x 50 cm, acrylic on canvas
At the beginning of a work of art, a demonstrative gesture often takes place, a radical re-evaluation with which the central nerve cord of a creative idea paves the way forward. In the work of Otto Muehl, this conceptual, almost ideological foundation is recorded in his manifesto texts from around 1962. The call for the »Destruction of the Panel Painting«, the equation »Matter = Colour«, and his aggression against the bourgeois ideal of a well-tempered, contemplative understanding of art all hark back to this time. However, they also determined his entire work and his life, which was radical in every respect.

Only a few of the assemblages and material collages created between 1960 and 1964 have been preserved. This is, on the one hand, due to the artist’s focus on developing his extensive performative work, also in the area of photography and film. On the other hand, an unknown number of these works were destroyed around 1970 during an eviction of his studio by the Vienna city administration – a brutal seizure of the work of an artist outlawed and scandalised after the outrage surrounding the »Art and Revolution« action at the University of Vienna in 1968.

Today, however, one can see retrospectively that Muehl's performative work in the 1960s was also accompanied by a consistently developing series of images. His conventional, late-Cubist pictures of the 1950s were followed around 1960 by a positively explosive gesture of liberation in the expansion of material-focused abstraction into the space. From 1965 on, we can see an anarchic ideological push, in which Muehl speaks out more and more radically against the bourgeois idea of art and the role of art and the artist in a late-capitalist economic and value system and prepares the ideological foundation of the commune he later founded. It is against this background that, for example, the series of »Personalities« and collages realised back then by means of both painting and screen printing should be interpreted.

Muehl is a post-Structuralist. In his concept of art, he is fundamentally critical of structures, normative ideas, and aesthetic theories. Principles of order are methodically deconstructed and their conditions questioned and overturned. Ultimately, he is interested in the possibilities of reinventing these structures in an open space free from values in accordance with his ideas – in developing new possibilities of viewing and perception in order to assign to art new social functions, as realised experimentally in the Aktions-Analytische Kommune (Action Analytical Commune) that formed from 1973. Since then his work has alternated freely between figuration and abstraction. With his series 12 Actions, created around 1973, Muehl increasingly turns back to painting, with twelve works in which he ironically references different aesthetic composition and style possibilities from modernism, and develops until his death a comprehensive body of work, which is reflected in numerous works on paper and prints. The role of the body, its potential for liberation, and its sexual emancipation are at the centre of this world of images.

Muehl now becomes a chronicler in painting of the group-dynamic analyses regularly conducted within the commune and of the film projects also realised there – which, by means of ironic portraits of artists as in »Vincent« and »Picasso«, the turn of the century in Vienna (»Back to Fucking Cambridge«) around 1900, and »Andy’s Cake« (Andy Warhol), criticise their fetishisation and art-historical trivialisation. During these years, however, he also deals with such traditional subjects as outdoor landscape painting, which he employs to depict his homes at the Friedrichshof and the Atelier des Südens on La Gomera.

A particularly large proportion of his painting during these years is dedicated to the further engagement with material abstraction and structural studies. He looks back on the works of the early 1960s and varies the »Material = Colour« equation established by him around 1960. In the works now being created, the then virulent negation of colour (all colour ends in the grey-brown of primeval mud) is replaced by a risky and playfully employed colouration. Muehl continues to reinvent himself in the spirit of Foucault’s »Le Souci de soi« and remains active. This principle of experimentation provides his work the strong variability of form, his wide range of expression between figuration and abstraction.

In 1991, after the end of the commune, Otto Muehl was sentenced to seven years’ imprisonment for »criminal offences against morality and violation of the narcotics law«. While still in prison and increasingly during his late exile in his studio in the Algarve, he created sharp political-satirical pictures (»Phettberg Cycle/Apocalypse«), a reckoning with the bigotry and repression of the history of Austrian society. In light of the political events of the time, the consequences of which can still be observed in European and Austrian politics, Muehl insisted, just as he had done in the second half of the 1960s, on the need for politically expressive art. The satirical works created then as well as those of the Sharks work cycle dated slightly later and the digital experiments of the »Electric Paintings« show the work of an artist who, in the choice of his gestural-formal and content-related means of expression, proceeds with the confidence of the aesthetic freedom he himself fought for in the post-avant-garde revolutions of the 1960s and 1970s.